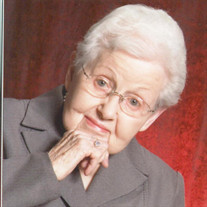 Vitra Wanita Rolander, 100, of McPherson, Kansas passed away Saturday, April 13th, 2019 while in the company of family members at Angel Arms. Vitra was born in Vitra's grandfathers farm in rural Grove, Oklahoma on March 3, 1919, a daughter of Glenn Obar and Dessie Bryan (Swisher) Sanders, Sr. Vitra attended a Hickory Flat country school rural Grove, Oklahoma, Tulsa grade school, Tulsa, Oklahoma, Stroud grade school, Stroud, Oklahoma and graduated from the London High School, London, Texas in 1937. The London High School exploded due to a gas leak and if it were not for Vitra being on the shorthand team and at a county meet at another school that day, she would have been there during the explosion. She was a member of Trinity Lutheran Church McPherson, Vitra was active in the Alter Guild and served her church in several capacities through the years. Vitra worked for a Dr. in Texas as a receptionist and worked in a variety store. In McPherson she worked for Woolworths at the candy counter for 1 day and then started working for Alliance Agency as a clerk and typist, was a homemaker and also worked for Farmers Alliance as a clerk and typist. Vitra was a member of the American Cancer Society in the McPherson area and served as chairman of the local drive. Vitra enjoyed spending time with her family. Vitra Sanders was united in marriage to Norvin Oscar Fritioff Rolander on April 20, 1944, at his parents home in McPherson, Kansas. The young couple established first home together in McPherson after Norvin was honorably discharged from the United States Army. This union was blessed with the birth of two children, a daughter Janet and a son Larry. Norvin died on December 22, 1999. She is survived by her son Larry Rolander, of Wichita, Kansas; her brother William B. Sanders and his wife Lois, of Tyler, Texas; she is also survived by 3 grandchildren, Tim, William and Sheila O'Dell and 5 great-grandchildren. Vitra was preceded in death by her parents; her husband Norvin Rolander; her daughter Janet O'Dell; her brothers, Glenn Jr. and Robert "Bob" Sanders. A memorial service will be held at the Glidden - Ediger Chapel, McPherson, Kansas, at 11:00 am on Saturday, April 20th, 2019 with Reverend Tim Leaf officiating. Burial will be at the McPherson Cemetery, McPherson, Kansas. Memorial donations can be made to McPherson Museum or McPherson County Food Bank or Woman and Children Combating Cancer and they can be sent to Glidden-Ediger Funeral Home; 222 W. Euclid, McPherson, Kansas 67460.

Vitra Wanita Rolander, 100, of McPherson, Kansas passed away Saturday, April 13th, 2019 while in the company of family members at Angel Arms. Vitra was born in Vitra's grandfathers farm in rural Grove, Oklahoma on March 3, 1919, a daughter... View Obituary & Service Information

The family of Vitra Wanita Rolander created this Life Tributes page to make it easy to share your memories.

Send flowers to the Rolander family.