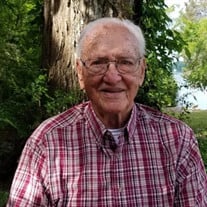 Wallace Lee Wittenberg of McPherson, Ks. passed away on October 20th, 2021. He passed away in Knoxville, Tn where he resided after the loss of his beloved wife Norma L. Wittenberg in 2015. Wallace was born in Canton, Ks on June 3, 1927, to parents Walter E. and Lila G. Wittenberg. After finishing school, Wallace joined the United States Navy serving his duty on the U.S.S. Columbia during World War II. He returned from the military to Canton and on June 11th, 1947, he and Norma were married. Wallace and Norma moved to McPherson, Ks where he took co ownership of Central Services until 1988. After retirement he went back to work inspecting pipelines for the city of McPherson. Wallace loved having projects to keep himself busy and was very skilled in many areas. Wallace was a devoted member of The First Christian Church for almost 50 years, serving as both a deacon and elder. He was also a member of Isis Shrine in Salina. Wallace was a friend to many, he genuinely enjoyed spending time with friends and family. His laughter and good nature, that at times could be a little mischievous, was a favorite to his family. Wallace was preceded in death by his parents Walter and Lila Wittenberg, his wife Norma and daughter Gayla Sue. He leaves behind his sister Bernice I. Banman of McPherson, Ks. His son Gary and wife Cathy of Knoxville, Tn. His 6 granddaughters. Linda Cook (Dan), Tammie Cook (Tim), Gayla Wilkinson (Jon), Angie Wittenberg, Chelsea Taylor (Robbie), Amy Reynolds (Steve) Wallace also leaves several great grandchildren and nieces and nephews. Funeral services for Wallace will be held on Thursday, March 17th, 2022, at 2:00 p.m. at First Chrisitan Church in McPherson, Ks with Pastor Lynn Scott officiating . His final resting place will be at Crestwood Memorial Park Cemetery will be private. In Lieu of flowers, memorial contributions can be made to the First Christian Church and they can be sent to Glidden-Ediger Funeral Home; 222 W. Euclid St., McPherson, Kansas 67460.

Wallace Lee Wittenberg of McPherson, Ks. passed away on October 20th, 2021. He passed away in Knoxville, Tn where he resided after the loss of his beloved wife Norma L. Wittenberg in 2015. Wallace was born in Canton, Ks on June 3, 1927, to... View Obituary & Service Information

The family of Wallace Lee "Wally" Wittenberg created this Life Tributes page to make it easy to share your memories.

Wallace Lee Wittenberg of McPherson, Ks. passed away on October...

Send flowers to the Wittenberg family.