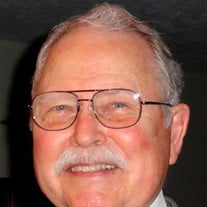 Ward P. Ferguson, 86, of McPherson, Kansas, passed away at 8:10 p.m., Wednesday, May 9th, 2018 suddenly at McPherson Hospital. Ward Pendleton Ferguson was born on June 28, 1931, to Homer J. and Meroe (Hapgood) Ferguson, raised and schooled in McPherson, Kansas, Ward found there was always something to do. During his youth he worked at various jobs including Tibb Anderson’s root beer stand, the McPherson swimming pool, Dillons grocery store, Bixby-Lindsay Drug Store and a couple of gas stations. He was in Co.A, 1st Battalion, 137th Infantry, 35th Div. National Guard from 6/24/48 to 6/24/53 and honorably discharged as Sgt.First Class. He attended McPherson College 2 years, then Kansas University for BA & LLB degrees, having worked those summers at Farmers Alliance, the Northern Pacific Railroad and for Penny Ready-Made Concrete. He was a member of Sigma Alpha Epsilon and vice-pres. Delta Theta Phi at K.U. law school, graduating in 1956. Ward worked for Alliance Mutual Casualty Co. / Farmers Alliance fourteen years during which he ran the Chanute claims office for three years; was instigator and co-founder of Southeast Kansas Claims Association. He founded and published "Footprints", the Kansas Claims Association newsletter. He received his pilot's license in 1967, then obtained Commercial Pilot and I.F.R. ratings. He went into private law practice with Weelborg, Embers & Ferguson in 1970, was County Attorney for two terms, was original member of the Board of Directors of the Kansas County and District Attorneys Association and then was elected 74th District Kansas State Representative for two terms. He served on the Kansas Aviation Advisory Committee (KDOT), McPherson Airport Advisory Board and was one year the Section Chairman of the Aviation Section in Kansas Bar Assn. Joining the Civil Air Patrol in 1989, he became a Mission Pilot, was McPherson Squadron Public Affairs Officer and Legal Officer. He was appointed State Director of the Kansas Department of Civil Air Patrol and made Kansas Wing Legal Officer and promoted to Major. Was "Kansas Wing Senior of the Year" in 1990. He received his General Ham radio license KB0HFW, taught a few semesters for Hutchinson Community College: two of Business Law and one of Criminal Law, was on Board of The Cedars (home for aged) for 10 years, was a Trustee and a Deacon in the First Baptist Church. He became interested in computers and from early 1980's wrote and sold computer programs to CLOAD Magazine and later to Kansas lawyers on under trade name "L'Eagle Enterprises". His work as a trial attorney was mostly criminal indigent defense work; he closed his law office in 1999 and worked from his house for select clients until retiring completely on July 1, 2006, after 50 years. He served as President of McPherson Lions Club in 2000-2001 and was editor of The Lion Tamer newsletter thereafter. Member of the Kansas Municipal Judges Association after being appointed Municipal Judge for McPherson on May 1, 1989, and until retirement as such on December 21, 2006. Was also judge in Galva Oct. 7, 1991, to Oct. 18, 2005, but resigned because of unfavorable medical report on his heart. He married Barbara Jean Mohn on November 4, 1954 and they had three daughters, Sandra Lynn Ferguson, Cheryl Ann Gassie and Janette Lea McGurk, 10 grand children and four great grand children. He loved his family very much. He was pre-deceased by his parents, his daughter, Sandra Lynn, and his brother, Jim, who died while flying on a WWII bombing mission. A visitation will be held on Tuesday, May 15, 2018 from 4:00 p.m. - 6:00 p.m. at the Glidden-Ediger Chapel in McPherson, Kansas. The funeral service will be Wednesday, May 16, 2018 at 10:00 a.m. at the First Baptist Church, McPherson, Kansas with Reverend Timothy Conner officiating. Final resting place will be at the McPherson Cemetery McPherson, Kansas In lieu of flowers, memorial contributions may be made to the Trans World Radio Missionary Services and they can be sent to the Glidden-Ediger Funeral Home, 222 West Euclid Street, McPherson, Kansas 67460.

The family of Ward P. Ferguson created this Life Tributes page to make it easy to share your memories.

Send flowers to the Ferguson family.