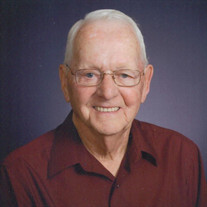 D. Wayne Chartier, 90, of McPherson, Kansas, passed away at 7:35 a.m., Sunday, October 24th, 2021 at Cedars House, McPherson, Kansas. Wayne was born in Concordia, Kansas on September 24, 1931, a son of Lenora Maxine (Layton) and Louie A. Chartier. Wayne attended the Districts 19 and 11 country schools, Lincoln grade school, and graduated in 1949 from Concordia High School, all of Concordia, Kansas. Wayne was united in marriage to Carolee Anne Russell on June 12, 1952 at the Canton Methodist Church, Canton, Kansas. The young couple established their first home together in Herington, Kansas. This union was blessed with the birth of three sons, David, Greg, and Kevin. During the Korean War Carolee moved back to Hope, Kansas until Wayne's honorable discharge when the family moved to Salina, Kansas. On December 4, 1954 they moved to McPherson and have lived here since that time. He was a member of First United Methodist Church McPherson, where Wayne was a member of the United Methodist Men, was head usher, and served his church in many capacities through the years. Wayne honorably served in the U.S. Army during the Korean War. Through the years, Wayne worked as a carpenter for Burk Construction, worked for the McPherson Sentinel as a compositor and was a production supervisor for Johns Manville all of McPherson. Wayne was a member of the American Legion Post 24, McPherson, Kansas, was a Cub Scout Leader for Pack 117 and Boy Scout Leader for Troop 117, McPherson Opera House Company where he served as a showtime volunteer. He coached little league baseball for many years. Wayne enjoyed, fishing, playing cards and spending time with his family. He is survived by his loving and devoted wife of over 69 years Carolee Chartier, of McPherson, Kansas; his sons, David Chartier and wife Kathy of McPherson, Kansas; Greg Chartier and wife Barbara of Apex, North Carolina, Kevin Chartier and wife Elizabeth Mason of Sheridan, Wyoming; his sister, Arlene Grame and husband Richard of Cummings, Kansas; his sister's-in-law, Beth Chartier of Herndon, Kansas, Linda Chartier of Lancaster, Kansas, and Deb Chartier of Atchison, Kansas; his eight grandchildren, Anne Zeka and husband Colby, of Wellington, Kansas, Lisa Patterson and husband Kiley, of Lawrence, Kansas, Mason Chartier, of Apex, North Carolina, Miranda Chartier, of Apex, North Carolina, Tristan Chartier, of Sheridan, Wyoming, Ethan Chartier, of Sheridan, Wyoming, Alyssa Duba, of Lander, Wyoming and Anya Gue, of Missoula, Montana; his six great-grandchildren - Ali Zeka, Brittan Zeka, Dru Zeka, Asher Patterson, Eva Patterson and Rana Duba; many nieces and nephews, other relatives and a host of friends. Wayne was preceded in death by his parents; his four brothers, Norman, Richard, Dale and Lynn Chartier. Memorial Service will be held at First United Methodist Church, McPherson, Kansas, at 11:00 a.m. on Monday, November 1st, 2021 with Reverend Emily Cannon officiating. Military honors will be presented by members of the American Legion Post 24 and Veteran's of Foreign Wars Post 2715 both of McPherson and Taps played by Mark Casebeer. The service can be seen on the Church's Facebook page at: http://www.mcphersonfumc.com Burial will take place at the McPherson Cemetery at a later date. Memorial contributions may be given to First United Methodist Church or Kindred Hospice in memory of Wayne and they can be sent to Glidden - Ediger Funeral Home; 222 West Euclid; McPherson, Kansas 67460

The family of Wayne Chartier created this Life Tributes page to make it easy to share your memories.

Send flowers to the Chartier family.