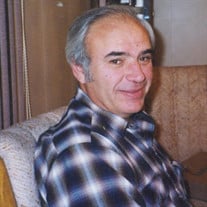 William Kenneth "Bill" Kaeppel, 76, of McPherson, Kansas, passed away at 9:17 a.m., Saturday, January 23rd, 2021 while in the company of his family, at his home. Bill was born in Sumner, Iowa on October 17, 1944, a son of Lana Young (Johnson) and Kenneth William Kaeppel. Bill attended the Black Hawk grade school, Edison Junior High and graduated from West High School all of Waterloo, Iowa. He honorably served in the U.S. Navy as a BT3 (E-4) during the Vietnam War. He received the Vietnam Service Medal. William Kenneth Kaeppel was united in marriage to Sharon R. Perry Densler on September 12, 1990 at Countryside Covenant Church, McPherson, Kansas. The couple established their first home together in McPherson. Bill worked for Femco for 27 years in several capacities through the years and retired as Design Engineer. Bill enjoyed camping, boating, fishing, cooking (experimentally), watching car races, and spending time with his family. He was very good working with his hands and was very talented and could build anything and it would last forever. He is survived by his loving and devoted wife of over 30 years, Sharon Kaeppel, of McPherson, Kansas; his children, Kelly Brownrigg and husband Jason, of Holman, Wisconsin, Debra Puce' and husband Carlos, of Wilmette, Illinois, Tina Waner and husband Mike, of McPherson, Kansas, David Densler and wife Diane, of Lincoln, Nebraska, and Sherri Densler, of Minnesota; his six grandchildren, Alex Puce', Joshua Puce', Nick Brownrigg, Branden Brownrigg, Drew Waner and Sydney Klassen and husband Andy; his favorite great-grandson, Rett Klassen; other relatives and a host of friends. Bill was preceded in death by his parents and a son, Bill Densler. Graveside services will be held at a later date at the Garden of Memories in Waterloo, Iowa. In lieu of flowers, memorial contributions may be made to Trinity Lutheran Church, Wounded Warriors or Kindred Hospice and they can be sent in care of the Glidden - Ediger Funeral Home; 222 West Euclid Street; McPherson, Kansas 67460.

The family of William Kenneth "Bill" Kaeppel created this Life Tributes page to make it easy to share your memories.

Send flowers to the Kaeppel family.