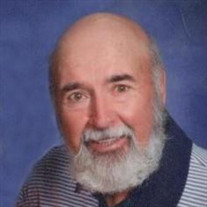 William Harold "Bill" Maurer, 74, of Inman, Kansas, passed away at 3:30 a.m., Wednesday, June 3rd, 2020 surrounded by his family at Hospice House of Reno County, Hutchinson. William was born in Mitchell, South Dakota on September 15, 1945, a son of Hans William and Maybelle Ruth (Sauerbier) Maurer. Bill attended Kalispell area grade schools and graduated from Flathead High School, in Kalispell, Montana in 1963. In 1965 Bill entered into the United States Army and honorably served his country during the Vietnam War and was discharged in 1969. He was a member of Grace Evangelical Lutheran Church McPherson. Through the years Bill worked as a heavy equipment operator and worked for the city of Kalispell in Montana from 1971 to 1985. He moved back to Inman in 1986 and worked 30 years for the City of Inman until his retirement as City Superintendent 2016. Bill enjoyed camping, gun collecting and traveling especially back to Montana where he grew up and raised his family. William Harold "Bill" Maurer was united in marriage to Donna Christine Winter on February 8, 1969 at Grace Lutheran Church, McPherson, Kansas. The young couple established their first home together in Georgia while he was serving his country. Later that year, he was honorably discharged and the couple moved to Inman, Kansas and later moved to his beloved state of Montana to raise their family. This union was blessed with 3 children, two daughters and one son, Barbara, Bill and Becky. He is survived by his loving and devoted wife Donna Maurer, of Inman, Kansas; his children, Barbara Nelson and her husband Greg, of Lansing, Kansas, Bill Maurer and his wife Keri, of Inman, Kansas and Becky Knackstedt and her husband Kendall, of Inman, Kansas; his sister Margaret Davis and her husband Roy, of Florance, Oregon. He is also survived by 6 grandchildren, Bradley Maurer, Jackson Nelson, Lauren Maurer, Sydney Maurer, Kristen Knackstedt and Tanner Knackstedt Bill was preceded in death by his parents; his brothers, Gordon Maurer and John Maurer and two sisters, Phyllis Maurer and Carol Ann Larson. Visitation will be held on Friday, June 5, 2020 from 6:00 p.m. - 8:00 p.m. at the Glidden-Ediger Funeral Home. A funeral service will be held on Saturday, June 6, 2020 at 10:00 a.m. at Grace Evangelical Lutheran Church, McPherson, Kansas with Reverend Dale Dumperth officiating. Burial will be at North Inman Cemetery Inman, Kansas. Military honors will be provided by the American Legion Post 24 and Veteran's of Foreign Wars Post 2715, both of McPherson. Memorial contributions can be made to The ALS Association, Hospice House of Reno County or Grace Lutheran Church and they can be sent to Glidden-Ediger Funeral Home, 222 West Euclid St., McPherson, Kansas 67460.

The family of William Harold "Bill" Maurer created this Life Tributes page to make it easy to share your memories.

Send flowers to the Maurer family.