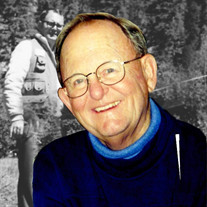 William Joseph “Bill” Sheets was born August 9, 1929, in Blackwell, Oklahoma to Joe and Mildred (Hess) Sheets. He was the eldest of three children; sisters, Cara Lou and Donna. In 1932 the family moved to McPherson, Kansas, because of the oil activity where his father was a bookkeeper for the oil company. His parents became active in the Scouting program for the benefit of their children. Bill remembers his father taking him on a troop campout at the age of 4 to the Lario Oil Company in Marion County. It rained during the whole outing. Later on, his dad’s employer bought the lake and land and many wonderful times were spent there. Bill joined the Scouts and earned the honor of Eagle Scout at the age of fifteen. Bill started working at a young age, first cleaning at the McPherson Municipal Swimming Pool, then as a paperboy, curb hop, jack-of-all-trades for Stanley’s clothing store. He attended McPherson Public schools and graduated with a Business Degree from McPherson College, McPherson, KS. After working at Farmer’s Alliance he found his true calling, real estate. After a time with Aurell and Sheets, he was joined by Bill Adams and they formed Sheets and Adams Real Estate where they both helped many families in the community build their dreams of owning a home, and built a reputation of honesty and integrity. Bill served his community in many capacities. He was the All School’s Day Chairman in 1961-1962; much to the enjoyment of his children, as they received free tickets for the carnival rides. He was the first recipient of the Chamber’s Man of the Year award when it was started in 1966. In 1982, it was renamed the President’s Award and it still follows the same criteria as when it originated. He later served as Chamber President in 1978-79. Bill was a SCORE (Service Corp of Retired Executives) Advisor for many years. He was always very enthusiastic to meet with individuals that were contemplating starting their own businesses as a positive person and great supporter of the McPherson community. Bill was a reader at the Christian Science Church in McPherson, Kansas. After it closed, he attended the Congregational Church in McPherson. Bill met his bride, Margaret Ann Darrah, in seventh grade when they both played clarinet in the school band. They were inseparable after that and married August 12, 1950, in the Congregational Church, McPherson. Kansas. Two children were born of this union, John Brent and Mary Margaret. Bill was a loving a devoted husband and father. He and Margaret enjoyed exposing their children and grandchildren to culture and adventures including theatre, the arts, and his love of the outdoors. He introduced them to snow skiing, and they all shared many family outings in Colorado and later it was trips to experience different cultures around the world. They accepted an opportunity to host a student with the Experiment in International Living program. Wipapan, a student from Thailand built a lifelong relationship with the family and became like another daughter. They also hosted another group from Mexico. Bill also enjoyed time with his buddies playing golf. Golf became one of his daily activities, after taking his morning swim. You never saw him sitting around. Bill was always on the move working on a project, planning the next family activity, or helping others. He was one of the original and longest member of his “financial club” (penny ante poker group) where he played monthly since 1960. Bill is survived by his loving wife of 67 years; his sister, Cara Lou Kean, Claremont, CA; son, J Brent (Debbie) Sheets, McPherson, KS; daughter, Mary (Brad) Spilman of Shawnee, KS; 6 grandchildren, Chad (Alisa) Spilman, Littleton, CO; Andy (Sophia) Spilman, Blanchard, OK; Allison (Vince) Wade, Overland Park, KS; Kim (Matt) Veer, Melville, SK Canada; T.J. (Lindsay) Dearing, McPherson, KS; and Major Thomas (Amie) Dearing, Maryville, TN; 14 great-grandchildren, 4 nieces and 4 nephews. He was preceded in death by his parents and sister, Donna Chilson. Visitation will be held on Friday, January 26, 2018 from 5:00 p.m to 7:00 p.m. at Glidden - Ediger Funeral Chapel. Memorial service will be held at the First Christian Church, McPherson, Kansas, at 11:00 a.m. on Saturday, January 27th, 2018 with Pastor Lynn Scott officiating. In lieu of flowers, memorial contributions may be made to Pulmonary Fibrosis Foundation and they can be sent to Glidden-Ediger Funeral Home, 222 West Euclid Street, McPherson, Kansas 67460. Memorials made to the Pulmonary Fibrosis Foundation in memory of Bill and they can be sent to Glidden-Ediger Funeral Home.

William Joseph &#8220;Bill&#8221; Sheets was born August 9, 1929, in Blackwell, Oklahoma to Joe and Mildred (Hess) Sheets. He was the eldest of three children; sisters, Cara Lou and Donna. In 1932 the family moved to McPherson, Kansas, because... View Obituary & Service Information

The family of William J. "Bill" Sheets created this Life Tributes page to make it easy to share your memories.

Send flowers to the Sheets family.