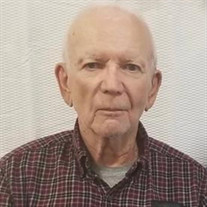 William Martin Silverstrand, or “Bill”, as he was fondly known by most, passed away at Brookdale Assisted Living, in McPherson, Kansas, on Thursday, December 2nd, 2021, at the age of 88. Bill was born in Council Bluffs, Iowa, on October 16th, 1933, to Martin E. and Edith B. Silverstrand. Bill was educated in the Council Bluffs Public Schools, attending Harrison Elementary School, and then Abraham Lincoln High School, where he graduated in 1951. After graduation, Bill enrolled at Creighton University, where he earned his Bachelor's of Science Degree in 1958. Bill went on to obtain a Master’s of Science Degree, in 1965, from the Kansas State Teachers College, in Emporia, Kansas. It was during his time in Emporia that Bill would meet his future wife, Jean I. Oltmanns. The two wed on June 10th, 1970, in Hutchinson, Kansas, and then moved on to Newton, Iowa, where they would both spend a number of years teaching. Bill began teaching in Newton's middle school, and would conclude his teaching career, as a media-specialist, at Newton High School. In 1992, Bill and Jean returned to Kansas, where they built a home in McPherson, to be closer to Jean’s family. There they joined St. Joseph’s Catholic Church, and were active in the parish for many years, donating time, talent and treasure to various projects. As a lifelong historian, Bill was known to have volunteered his time with the Kansas Historical Society, focusing his efforts on their work along the Santa Fe Trail, in McPherson County. Bill’s other community contributions included: his loyal delivery of “meals on wheels” throughout the McPherson community; his time spent volunteering at the McPherson Senior Center; and his weekly presence and support of the McPherson Public Library. At home, Bill enjoyed spending his time as a Master Gardener, dominoes player, avid reader and lifetime subscriber to numerous periodicals. Bill will be remembered as a loving and devoted husband of 42 years to his wife, Jean; and as a brother, uncle, teacher, good neighbor and friend to many. Bill is preceded in death by his parents; his wife, Jean; his sister, Veronica Melton; and his brother, Larry Silverstrand. Bill is survived by his sister-in law, Alice Silverstrand, of Omaha, Nebraska; many nieces and nephews; other relatives and friends. Visitation will be held at 9:00 a.m. to 9:45 a.m. with Rosary starting at 10:00 on Tuesday, December 7th 2021 at St. Joseph's Catholic Church in McPherson, Kansas. A Mass of Christian Burial will be celebrated at 10:30 a.m. on Tuesday, December 7th 2021 at St. Joseph's Catholic Church in McPherson, Kansas with Fr. Ben Shockey officiating. Final resting place will be at the McPherson Cemetery McPherson, Kansas. Memorials are suggested to St. Joseph's Catholic Church and they can be sent in care of the Glidden - Ediger Funeral Home; 222 West Euclid Street; McPherson, Kansas 67460.

William Martin Silverstrand, or &#8220;Bill&#8221;, as he was fondly known by most, passed away at Brookdale Assisted Living, in McPherson, Kansas, on Thursday, December 2nd, 2021, at the age of 88. Bill was born in Council Bluffs, Iowa,... View Obituary & Service Information

The family of William M. "Bill" Silverstrand created this Life Tributes page to make it easy to share your memories.

William Martin Silverstrand, or “Bill”, as he was fondly known...

Send flowers to the Silverstrand family.