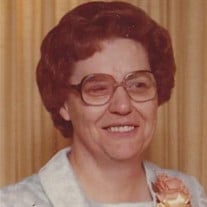 Wilma Jean Koehn, 83, of McPherson, Kansas, passed away at 10:30 a.m., Sunday, November 5th, while in the company of her family, at Angel Arms. Wilma was born in Winton, California on February 27, 1934, a daughter of Bertha (Schmidt) and David H. Koehn. Wilma attended the Winton Elementary School, Winton, California and graduated from Livingston High School, Livingston, California in 1951. Wilma was a homemaker and she took great pride in providing for her family in this manner. She started working for Memorial Hospital, McPherson, Kansas as a Supervisor of House Keeping and Laundry and worked for the Hutchinson Hospital in the Pharmacy Department. She is retired from McPherson Walmart after 11 years of service. Wilma enjoyed, people, sewing, quilting, cooking, baking, painting and working on many craft items and spending time with her family. Wilma Jean Koehn was united in marriage to Raymond J. Koehn on May 4, 1952 at Winton, California. He died on July 8, 2005. She is survived by her children, Carol J. Koehn, of Stover, Missouri and Michael R. Koehn and his wife Kalin of McPherson, Kansas; her brother, Frank Koehn and his wife Elaine, of Jacksonville, Florida; her 5 grandchildren, Kyle Koehn, Richard Koehn(Ramona), Kristina Koehn, Danial Koehn,(Krista) and Mikayla Koehn, and 5 great grandchildren; several nieces and nephews other relatives and a host of friends. Wilma was preceded in death by her parents; her husband Raymond, 5 sisters, Elsie Koehn, Dorothy Wedel, Lila Koop, Bina Koehn, Betty Koehn; 2 brothers, Ervie Koehn, Homer Koehn; and her son-in-law, Monty Koehn. Friends are invited to call on Friday November 10, 2017 from 4 p.m. to 8 p.m. with family present from 6 to 8 p.m. at Glidden - Ediger Chapel, McPherson. The funeral service will be held at Glidden - Ediger Chapel, McPherson, Kansas, at 10:00 a.m. on Saturday, November 11th, 2017 with Minster Maynard Koehn officiating. The final resting place will be at the McPherson Cemetery McPherson, KS. Family request donations to Wilma Koehn memorial fund and they can be sent in care of the Glidden - Ediger Funeral Home; 222 West Euclid Street; McPherson, Kansas 67460.

Wilma Jean Koehn, 83, of McPherson, Kansas, passed away at 10:30 a.m., Sunday, November 5th, while in the company of her family, at Angel Arms. Wilma was born in Winton, California on February 27, 1934, a daughter of Bertha (Schmidt) and David... View Obituary & Service Information

The family of Wilma J. Koehn created this Life Tributes page to make it easy to share your memories.