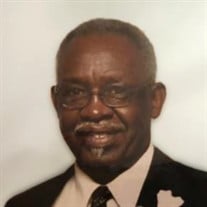 Wynfred H. "Winnie" Chandler, 86, of McPherson, Kansas passed away at 2:56 p.m., Thursday, August 20th, 2020 while in the company of family members, at Angel Arms. Wynfred Chandler better known as Winnie was born in Checotah, Oklahoma on June 13, 1934 to Jesse and Leona “Landrum” Chandler. Winnie was the third of five children. He attended Rentiesville High school where he was a stand out Basketball player. Winnie accepted Christ at a young age and was a current member of Morning Star Baptist Church in McPherson, Kansas under the leadership of Reverend James Hollis. Winnie met the love of his life Velma McPherson in Checotah, Oklahoma in June of 1954. Shortly after they relocated to McPherson, Kansas. To this union three sons were born, Victor, Gary and Dwayne. While raising and supporting his family, Winnie worked as the manager of the American Legion Post 24 for several years prior to starting with N.C.R.A. in the 70's. Through the years with N.C.R.A. he worked as an employee, operator, and retired as an operator 3 in the mid 1990's. Winnie was an outdoorsman. He enjoyed fishing, camping and hunting. However, his greatest thrill was recognizing his athletic ability’s that were passed down to all three of his sons and grandchldren. He found the most joy in attending all their various sporting events from basketball, baseball, football and track. After retirement, he found relaxation watching college basketball, football and various western movies and shows. He was a great dad, and proud grandfather and excellent husband. Winnie took pride in making sure Velma’s every need was met until his very last breath. Winfred was proceeded in death by his parents Leona and Jessie chandler and three siblings Russell, Olbra Chandler, and Minnie Wallace . He is survived by his loving and devoted wife of over 65 years, Velma Chandler, of McPherson; his sons, Victor Chandler and wife Jan, Gary Chandler and wife Donna, and Dwayne Chandler and wife Jendy, all of Wichita, Kansa; his baby sister, Ruth Cooper and husband Alfonso, of Oklahoma City, Oklahoma; and a host of Grand-kids, Great Grand-kids family and friends. Graveside service will be held on Friday, August 28, 2020 at 1:00 p.m. at the McPherson Cemetery, McPherson, Kansas with Pastor James Hollis officiating. Memorials are suggested to the Morning Star Baptist Church in memory of Winnie and they can be sent in care of the Glidden - Ediger Funeral Home; 222 West Euclid Street; McPherson, Kansas 67460

The family of Wynfred H. "Winnie" Chandler created this Life Tributes page to make it easy to share your memories.

Send flowers to the Chandler family.