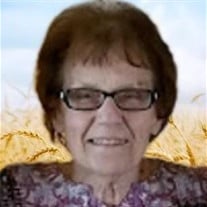 Yvonne Eilene Friesen, 81, of Galva, KS, passed away at 4:20 p.m., Saturday, July 20th 2019, while in the company of family members, at Cedars Health Care Center. Yvonne was born in Galva, Kansas on September 28, 1937, a daughter of Mable Adeline (Giesel) and Henry H. Ratzlaff. Yvonne attended Moundridge Grade School, Moundridge Junior High, and one year at Moundridge High School, Moundridge, Kansas. Later she returned to school and graduated from Galva High School, Galva, Kansas in 1972. Yvonne Eilene Ratzlaff was united in marriage to Jack Wilfred Grant on March 16, 1955 at McPherson County Court House. The young couple established their first home together in Galva. This union was blessed with the birth of four children, Kyle, Jacki, Amy and Lance. Jack died on February 6, 1969. Yvonne Eilene Grant was united in marriage to Lowell James Friesen on November 14, 1970 at Galva United Methodist Church, Galva, Kansas. The couple established their first home together in Galva. This union was blessed with the birth of a son, Kraig. She was a member of Galva United Methodist Church Galva, Kansas where she served on numerous committees. Yvonne was a homemaker and she took great pride in providing for her family in this manner. Through the years, she held multiple part time jobs and took full time employment in 1977 with Sterling Drug Inc. in McPherson as a PMC and Component Prep attendant until she retired in 2002. Yvonne was a member of the American Legion Ladies Auxiliary, Galva, Kansas. She enjoyed bingo, ceramics, both flower and vegetable gardening, canning, making jellies, and loved to cook. Her greatest joy and love was her grandchildren and great-grandchildren and she enjoyed attending their games and activities. She is survived by her children, Jacki Clinton and husband Tony, of Canton, Kansas, Amy Campbell and husband Steve, of McPherson, Kansas, Lance Grant and wife Kathy, of Canton, Kansas, and Kraig Friesen and wife Traci, of Galva, Kansas; her brother, Melvern Ratzlaff and wife Theresa, of Hillsboro, Kansas and sister Evy Boese, of McPherson, Kansas; her 11 grandchildren; 24 great-grandchildren; many nieces and nephews, other relatives and a host of friends. Yvonne was preceded in death by her parents; her husbands, Jack Grant and Lowell Friesen; her son, Kyle Jack Grant; her great-granddaughter Shaylynn Widener; and sisters, Lela Unruh and Beulah Unruh. Visitation will be Thursday, July 25, 2019 from 5 p.m. to 7 p.m. at Galva United Methodist Church, Galva, Kansas. The funeral service will be held at Galva United Methodist Church, Galva, Kansas, at 10:30 a.m. on Friday, July 26th, 2019 with Reverend Mike Miller officiating. Burial will be at the Empire Cemetery rural Galva, Kansas. In lieu of flowers, memorial contributions may be made to Galva United Methodist Church or the Galva Senior Center and they can be sent in care of the Glidden - Ediger Funeral Home; 222 West Euclid Street; McPherson, Kansas 67460.

Yvonne Eilene Friesen, 81, of Galva, KS, passed away at 4:20 p.m., Saturday, July 20th 2019, while in the company of family members, at Cedars Health Care Center. Yvonne was born in Galva, Kansas on September 28, 1937, a daughter of Mable... View Obituary & Service Information

The family of Yvonne E. Friesen created this Life Tributes page to make it easy to share your memories.