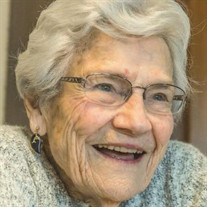 Zelma Marie Krehbiel, 95, of McPherson, Kansas, passed away at 6:45 p.m., Monday, February 4th, 2019 while in the company of family members at Angel Arms. Zelma was born on her parents' farm near Geary, Oklahoma, on February 25, 1923, daughter of Annie (Base) and Emil Cornelius Dalke. Sammy attended the Canadian Country School near Geary, Oklahoma, where Sammy, Elvera, and Alvin all rode the same horse to school for 2 1/2 miles. Sammy was in the middle holding the lunch pails. She graduated from Geary High School in 1941. She then attended Bethel College, North Newton, Kansas, where she met the man she would later marry. She was a member of First Mennonite Church, McPherson, KS, where she was involved with the ladies' circle, choir, and the quilting group. She served her church throughout the years in many capacities. Sammy was a homemaker, and she took great pride in providing for her family in this manner. She also worked for Boeing and Cessna Aircraft during W.W. II, for Farmers Alliance Insurance Company of McPherson as a rate clerk, as a secretary and later an Insurance Agent for Duguid Company, which later changed to Landmark Company from which she retired. Sammy was a member of several ladies' organizations in McPherson. She enjoyed quilting, golfing with her friends, working in her flower gardens around the house, and traveling after retirement. One of her greatest joys was being able to sing in the a cappella choir while in college, and also singing in the choir in her church. When the immediate family was traveling, they would all break out singing with not everyone on the same note! Zelma Marie "Sammy" Dalke was united in marriage to Marlo "Jake" Krehbiel on July 3, 1943, at the Bethel College Chapel in North Newton, Kansas. The young couple established their first home together in Wichita, Kansas, during W.W. II, where Jake worked for Boeing Aircraft building planes and Sammy worked in the Boeing and Cessna offices. Following the war, the couple moved to Hutchinson, Kansas, and in 1947 the family moved to McPherson, Kansas. Five children were born to this union, two daughters and three sons: Larry Wayne, who died at birth, Constance, Michael, Patricia, and Mark. Jake died on June 9, 2013. She is survived by her children Constance "Connie" Krehbiel, of Vallejo, Caliornia, Michael "Mike" Krehbiel and wife Debby, of Albuquerque, New Mexico; Patricia "Patty" Smith and husband David, of Colorado Springs, Colorado, and Mark Krehbiel, of Monte Vista, Colorado; her brother Edgar Dalke and wife Paula, of Burnet, Texas; eight grandchildren: Christopher Watson, Terence Watson (Carmen), Kimberley Gourlay (Anderson "Drew"), Holly Krehbiel, Haynes Taylor (Karen), Zachary Smith (Nicole), Luke Smith (Jessica), Taylor Smith (Katie); fourteen great-grandchildren: Hayley Watson, Aurora Watson, Pierce Gourlay, Declan Gourlay, Daniella Rees, Cabery Taylor, Cooper Taylor, Preston Smith, Jameson Smith, Isabelle Smith, Makayla Smith, McKenna Smith, Maddox Smith, and Merrik Smith, Sammy was preceded in death by her parents, Emil and Annie Dalke; her husband Marlo "Jake" Krehbiel; a son Larry Wayne Krehbiel; sister, Elvera Klippenstein; and a brother Alvin Dalke. A memorial service will be held on Saturday, February 23, 2019 at 11:00 a.m. at the First Mennonite Church, Mcpherson, Kansas, with Pastor Rose Marie Zook Barber officiating. In lieu of flowers, memorial contributions may be made to MCC Relief or First Mennonite Church.

Zelma Marie Krehbiel, 95, of McPherson, Kansas, passed away at 6:45 p.m., Monday, February 4th, 2019 while in the company of family members at Angel Arms. Zelma was born on her parents' farm near Geary, Oklahoma, on February 25, 1923, daughter... View Obituary & Service Information

The family of Zelma Marie "Sammy" Krehbiel created this Life Tributes page to make it easy to share your memories.

Zelma Marie Krehbiel, 95, of McPherson, Kansas, passed away at...

Send flowers to the Krehbiel family.