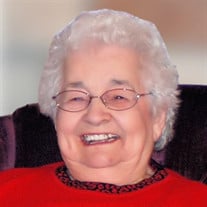 Zona R. Emerson, 90, of McPherson, Kansas, passed away at 4:08 a.m., Tuesday, December 18th, 2018 while in the company of family members at her residence. Zona was born in Salisbury, Missouri on August 30, 1928, a daughter of David Asbury and Elsie Dora (Medlin) Bills. Zona attended the Winston Grade school, Winston, Mo, Altamont Grade School in Altamont, Mo. and the Kidder High School in Kidder, Mo. She was a member of First Christian Church where she was a member of the Women's Fellowship and served in the kitchen. Zona was a homemaker, co-owner and operator of Poor Johns along with her husband John, and worked for her son, Tod, as an office manager for Emerson Restorations and Emerson Collison Repair. Zona was a member of the Rolling Pins and McPherson Senior Citizens exercise group. Zona Ruth Bills was united in marriage to John Lewis Emerson on October 31, 1964 at McPherson, Kansas. John died on September 18, 2015. She is survived by her children, Tod Emerson and his wife Angie, of McPherson, Kansas, Bob Dobbins and his wife Jennifer, of Grand Island, Nebraska, Sharon Pankratz, of McPherson, Kansas, Iona Likins, of McPherson, Kansas; her sister Bonnie Franklin, of Lathrop, Missouri; her 10 grandchildren and 22 great-grandchildren. Zona was preceded in death by her parents; sons, Ricky Lynn Dobbins and Buddy Lee Dobbins; a grandson, Jeffery Pankratz; sisters, Eva Sutton, Anna Hassinger and Ruby Temple. Memorial Service will be held at the First Christian Church at 11:00 a.m. on Saturday, December 29th, 2018 with Pastor Lynn Scott officiating. Memorial contributions may be given to First Christian Church and they can be sent to Glidden-Ediger Funeral Home; 222 W. Euclid St., McPherson, Kansas 67460.

Zona R. Emerson, 90, of McPherson, Kansas, passed away at 4:08 a.m., Tuesday, December 18th, 2018 while in the company of family members at her residence. Zona was born in Salisbury, Missouri on August 30, 1928, a daughter of David Asbury... View Obituary & Service Information

The family of Zona Ruth Emerson created this Life Tributes page to make it easy to share your memories.

Send flowers to the Emerson family.